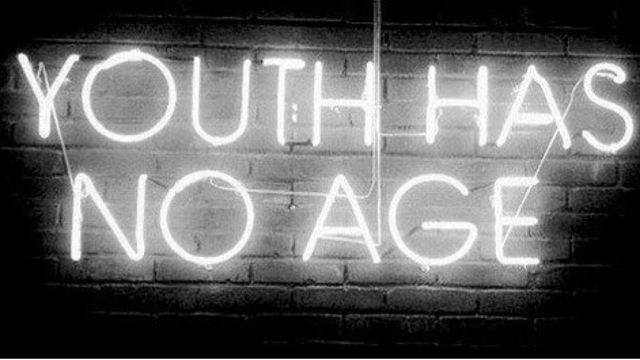 A version of this post originally appeared on Elite Daily.

No matter the font selection or caps arrangement, the words seem pretty aggressive to me, and I really don’t appreciate the tone.

“Age is of no importance unless you are a cheese,” a meme smiles at me from my Instagram feed. I nod enthusiastically, desperately wanting to believe that it’s true. Totally –  either way I’m amazing, girls run the world, and I love bad b*tches, that’s my f*cking problem, blah, blah, blah…

Part of me definitely DOES believe that hype; I don’t feel my age, and I often am assumed to be younger (this is the ultimate compliment for me; I’ve been working on controlling my reaction, because the high pitched squeal and breathy laughter just screams that you’re old). But wait – back the f*ck up. I don’t understand how I got here, seemingly so fast; what happened to, I don’t know, 1999? That was a pretty good year (I am excited to report that those 90’s tattoo chokers are back in style. I rocked those b*tches hard back in the day, before #tbt was even a thing. I’ve so been waiting to ‘Angela Chase’ all over again…anyway, I digress). As young as I may feel inside, the actual number itself is still daunting, and odd.

When my mother brought me into this world, she was 35 years old… an age that was considered very old to even have children at that time (ew. “at that time.”). So now I am roughly a month or so out from being the same age, and while she had a house, a husband, and three kids (and a dog too), I often feel like my biggest accomplishment has been not getting pregnant (again, lol. I did accidentally get married, whoops).

I kid, I kid; I am pretty content with my life, all things considered, but seriously. SERIOUSLY. The time, it is slipping, so let’s talk about age and life and how freaking weird it is to get older…to BE “old.”

Aging is a topic I have been mildly obsessed with since I was 15 years old or so… I am not sure what set it off, but I remember getting a bad sunburn, and noticing how the skin crinkled around my eyes. Pointing out to my mother that I had wrinkles and that it bothered me, she rolled her eyes and told me to stop staring in the mirror, because I obviously had too much time on my hands. Burn. #getalifeloser

I’ve had this theory – this ‘timeline’ of aging, if you will – since about that time, and I still believe it just as much now –  the first range below is the stage of years where you have milestones to hit, and are generally excited about getting older (and life, lol. #innocence):

17 – You get your driver’s license, rollin’ down the street…only listening to gin and juice, obv.

18 – Legal adult. Can buy cigs, if that’s something you’re into (even though you’ve been bumming them for years anyway if you’re like half the people I knew that smoked).

20 – Officially out of your teens, alright, okay.

After that… what is there? I’ll tell you what. Here is the rest of your timeline. Skip the entire 21-24 period, because this is generally a period of carefree fun and abundance. But just like a sneaky spider (nothing more evil I can make a decent comparison to) it catches up to you…

25 – Quarter-life crisis. Might buy some books and Google your “symptoms.” Get a cat (or 3), purchase wrinkle cream, and vow to begin a skincare regimen (seriously, don’t sleep in your makeup. Stop it).

26 – Okay, I may have overreacted at that whole 25 thing. I’m not super old yet, but I’m a little nervous because I’m kind of creeping into my late 20’s and everyone is getting engaged and having babies and this is weird… and why is my voice so high-pitched?

27 – 26 looks a lot better on paper than 27 does. It wasn’t so bad. Salary continues to fund the bridal and baby showers of friends. Should I get married and/or get impregnated… am I an adult now?

29 – 365 days, OMFG. Simultaneously worry about being #foreveralone if you’re single.

30 – Scary at first… but then there’s almost this flooding feeling of relief as you realize you’re the youngest of your decade (yes, it f*cking counts, okay). Also, you really start to not give a F*CK about things that don’t actually matter, like what other people think of you. It’s actually kind of amazing. #confident

33 – Obviously, we are getting much closer to 34, which is close to 35, and we all know what that means…you occasionally remember when you knew someone (years ago) who was in their thirties, and they just seemed so… old.

34 – This is a repeat of the countdown to 30, with results expected to have much more of an impact. Why? Deep breath…

35 – In all fairness, I am not there officially, but I feel comfortable in forecasting the remainder: 35 is basically 40. Don’t even bother going through the justification of your late thirties. Who cares? You’re old, bro. Woof. I refuse to even discuss any other numbers (I probably will rescind this statement a year from now, but that’s neither here nor there). So, there you have it.

I am now at the point of the year where I look at the calendar and acknowledge that my birthday is creeping closer, and I gently ask myself how I’m feeling about it (like a one-on-one therapy session with my inner self – it’s good to check in). I know I have jokes, but I think I’m handling it pretty well, thus far. I also think I really am getting old, because despite my timeline theory, I’m kind of thinking that your youth is definitely on the bottom half of the mid-life crisis, and I have a good 15 years until then. So I guess the good news is that age is only as scary as you allow it to be.

The REALLY good news about turning 35? I give even less f*cks than before.

with love and rosé,