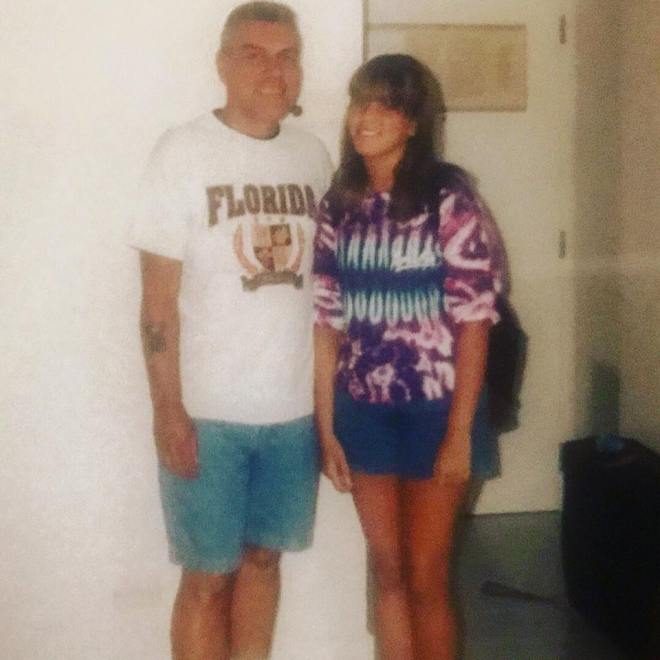 “Do you want me to write you a thank you card, too?” my mother asked.

“For what?” I asked, confused.

“For being there for me…” Her voice wavered slightly.

We were sitting together, watching tv and talking about him. Everything, all of it. The blur from January 29th forward. All the thank you cards were written, all arrangements and ceremonies and tasks had been done. He was really gone. We were now in that blank space, that void of grief, which seems to be like waves of an ocean; you think you’re doing pretty good and then one smacks you out of nowhere and knocks you down.

My face furrowed in sarcastic disbelief, and I was simultaneously touched at the sweetness in her voice, but kind of taken aback as well. I craned my neck and turned my head in her direction and looked directly at her, trying really hard not to let my voice crack.

On January 28th, I visited my dad at the hospital. He was in pain, uncomfortable, and refusing to eat. I could tell he was disgusted with it all. My father was a hard working, dedicated man that took care of other people, not the other way around. He was on 100% oxygen and still couldn’t catch his breath. I didn’t even want to ask him too many questions because I knew it was difficult for him to talk. That night I prayed (and while I have my beliefs, it is not something I often do) with everything I had. I asked that he get better…but if that wasn’t a possibility, to please not let him suffer.

Hours later, the hospital called at 3 a.m. and told us he had an episode and had been transferred to the CCU. I took off of work, and my sister, mother and I went to the hospital to see him. I was unprepared for this visit: the doctor said that they couldn’t continue chemo, that the cancer had exploded and there was nothing more they could do. My father laid in a bed and there were machines and tubes everywhere. The machine was breathing for him; he wasn’t conscious. I couldn’t stop crying, to see him that way. We decided as a family to not make him suffer any longer, and he passed that evening. It still doesn’t seem real that he isn’t with us anymore.

I don’t know how to take any of it, that I asked for his suffering to stop and it did – I don’t know if it’s a gift? A twisted, horrible gift.

However, I do know what gift I was given that I will cherish. A renewed perspective, a reminder to always appreciate everything that I hold dear.

My family. My friends, the people that were and have been there for me, even if it’s just to ask how I am doing. I never realized how much it would matter to see who showed up for me during this time. It matters. Knowing that time is not promised to any of us, and shouldn’t be taken for granted. Words should never go unsaid. I have always believed that but it’s still something you take for granted until one of the most important people in your life is taken from you so swiftly.

Today is my 37th birthday. I have historically not been a fan of my birthday, but I had hoped this was going to be a good one (3/8/81 vs 3/8/18, ha). My biggest wish can’t come true, so instead I will make sure to honor my dad’s memory by remembering how grateful I am for all the amazing people still in my life, and ask anyone who reads this to do the same.

If so inclined, please also consider donating to the American Cancer Society, in honor of my father and all those fighting cancer.

I miss and love you, Dad. xo

Happy Birthday mamacita ♥️🥰🥳🎂🤍 #happybirthday #youdeserveallthehappiness
🤍
I am so incredibly lucky. 🖤
I used to think I was sooo old in my early 30s. #actuallyoldnow #happynewyear #hindsightis2020
#2020vision
Happy New Year ✨ #happynewyear #2020
🦢🌹✨ #rupikaur
🥰🎄🎁🎅🏻
after my mom kicked all of our asses in @whatdoyoumeme #merrychristmas